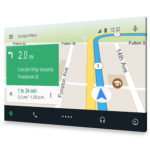 Google has teamed up with Qualcomm, with the aim of making Android significantly more accessible in cars. Although the existing Android Auto system has proven reasonably popular with manufacturers, being used by 40 car brands in around 100 models, its requirements can be limiting for some consumers.

Owning a car which supports Android Auto is not enough to use the system. Currently, a smartphone running Android 5.0 Lollipop, or greater, is also needed.

Google and Qualcomm are working together to allow manufacturers to install Android directly into cars, meaning that a separate device will not be required.

At present, Android Auto shows drivers relevant information, such as navigation details, in the form of cards. It is also compatible with apps such as Google Play Music and Spotify.

Using Qualcomm’s Snapdragon processors, car manufacturers will now have many more options available. Rather than Android simply being an add-on, as is effectively the case with Android Auto, the operating system could be directly integrated into in-car entertainment systems.