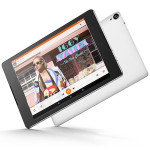 Following the release of the HTC-manufactured Nexus 9, it appears the Taiwanese company could be planning to announce another tablet. The device will reportedly be of similar dimensions to last year’s 8.9-inch slate, but this time will receive HTC – rather than Nexus – branding.

The report has come from renowned Twitter-tipster upleaks, who cautioned that the new tablet will not be released in the first quarter of 2015.

A new HTC tablet based on the Nexus 9 would not be an especially surprising development. When ASUS was making tablets for Google, they also followed a strategy of releasing an ASUS-branded product, which was similar to their Nexus device.

In July 2013, the ASUS MeMO Pad HD 7 was released. It came around a year after the first generation Nexus 7, and was similar to the Google tablet.

Given the money already invested by HTC in developing the Nexus 9, it could make commercial sense to rely on the platform in order to target a different market.