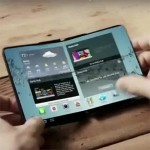 As smartphone manufacturers find it increasingly difficult to make their flagship devices stand out in a crowded marketplace, innovation becomes increasingly prized. Now Samsung is believed to be making good progress in the development of flexible displays, which could play a pivotal role in the industry.

According to a recent report that has emerged from Samsung’s home market of South Korea, the company is on track to start mass producing flexible displays later this year. The development would apparently then lead to foldable smartphones arriving in 2017.

Given that the technology is still being developed, as is not yet ready for mass production, foldable smartphones in 2017 are far from a certainty. Given the potential impact that flexible displays could have on the industry, this is nonetheless a topic that many will be following closely.